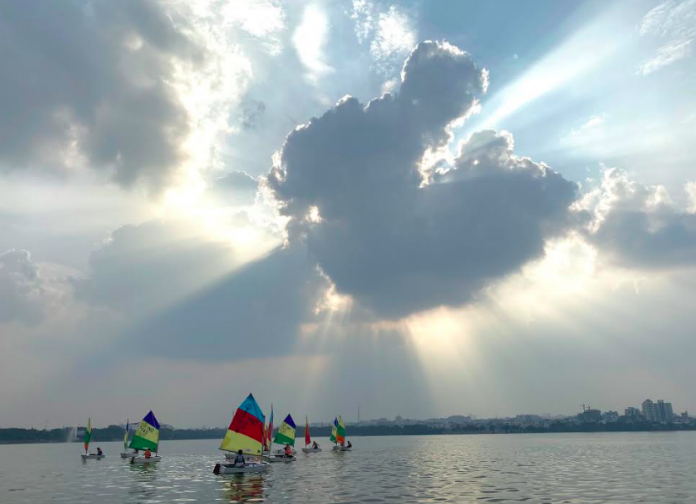 It was the field day for Preethi Kongari, Jaikiran Bolli, Majji Lalitha  and Lakshmi Chandram

Hyderabad, October 09, 2020….The weather gods were in total confusion and after a long spell of dead calm threw in a huge storm that decimated the Telangana State Fleet and the race officer Gowtham Kankatla had to abandon the last race.

“We were worried since yesterday about the winds letting us down but we got a bit lucky and hope for great weather tomorrow onwards “, said Suheim Sheikh The President and Coach at the Yacht Club of Hyderabad

Shri. Rajat Kumar, IAS, Principal Secretary, Govt of Telangana earlier in the day carried out an inspection of the Fleet as Chief Guest and met each sailor personally with words of encouragement .

Preethi Kongari of Hyderabad and Jaikiran Bolli of Wanaparthi dominated Group A and Majji Lalitha  and Lakshmi Chandram dominated Group B almost assuring them a spot in the Gold Fleet that will be sailed once the qualifiers of two races are completed tomorrow followed by the finals .

The Sub Junior Novices fleet started one race but sailed right in to the storm and all the little sailors , most of them below 11 years were rescued from the wind and waves had an advernturous session and were brought safely but drenched to shore ,they will need to commence racing tomorrow. That said Bushra Minaj of Udbhav School , Rasoolpura was well in the lead and had to sacrifice her win to the sudden storm.

It is the first major sporting event across India happening

The Telangana State Junior Regatta has 56 participants and will conclude on 11th October.

56 sailors registered from across 16 districts .

The State Championships have been traditionally an open championship but due to Covid restrictions this year is restricted to just the districts of Telangana . Sailors from 11 districts Wanaparthy, Nalgonda, Nagakurool, Vikarabad, Gadwal, Siddipet, Warangal, Sangareddy, Medak  and of course Hyderabad and Rangareddy will participate .

With 56 entries across three categories— Juniors, Sun-Juniors and Novices,  it is, against all odds, one of the largest ever.

Points and ranking as at end of Sailing today