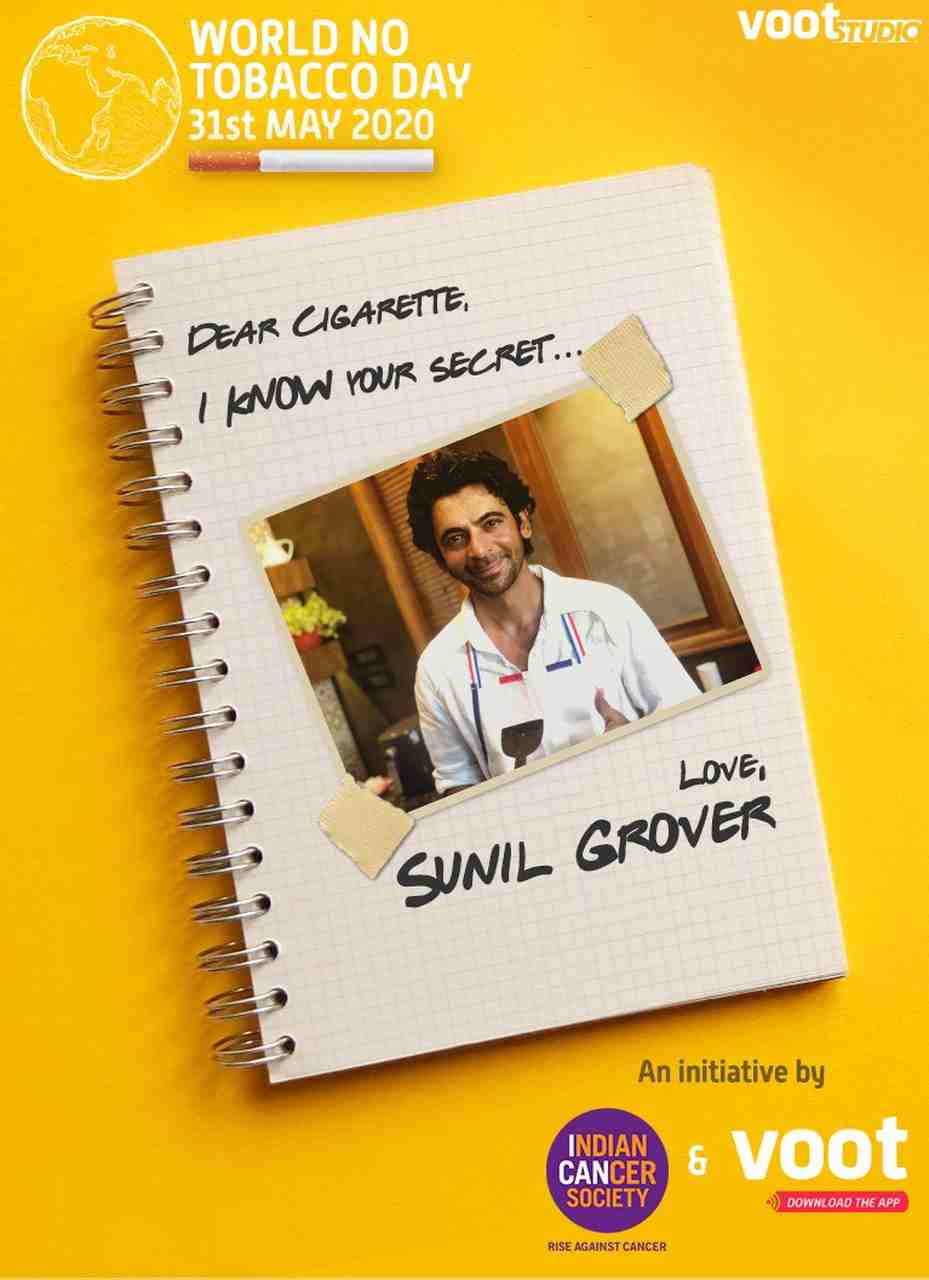 June 1, 2020, Mumbai: Smoking has been a major health hazard and a primary cause of major life-threatening illnesses for many decades. For the entire 20th century it is estimated that around 100 million people lost their lives prematurely because of smoking. On this World No Tobacco Day, India’s premium video on demand platform VOOT has partnered with Indian Cancer Society on its World No Tobacco Day 2020. The campaign endeavors to raise awareness about the health hazards of smoking and tobacco usage. Executed by VOOT Studio, the short and high impactful video featuring one of the most popular actors Sunil Grover will urge people to stop smoking.

The film is a mockumentary and offers a satirical take on the contents required to cook up a cigarette. The film will see Sunil Grover with his usual sass and ease making a cigarette with all the lethal ingredients that one would never consume. The film culminates with a strong behavioral change message of giving up tobacco and cigarettes given its toxicity and long terms effects on health.

Speaking about the association Akash Banerji, Head AVOD Business, VOOT said, “At VOOT Studio we are focused on empowering our partners to effectively deliver on their brand and campaign message effectively through engaging, innovative and relevant brand solutions.  Partnering with Indian Cancer Society for this imperative behavioral change initiative is even more special and solves for a critical issue plaguing the world.  We are sure that this innovative and sarcastic take on the issue will strike a chord with the audiences and allow the message to be delivered far and wide through the reach of the platform.”

Shivani Sanghavi, Marketing Director of Indian Cancer Society speaks of the genesis of the campaign. “While it is common knowledge that smoking is harmful, it is unusual that people at large are ignorant of the use of such chemicals that go into making a cigarette. Indian Cancer Society through the campaign attempts to create an awakening that results in people quitting smoking. We believe that everyone, including the protagonist will rethink their habits with the compelling facts presented in the video.”

The script was written by her to spread awareness and educate the masses to make informed choices.

Tobacco leads to more than 7 million deaths every year worldwide and the campaign aims to put an end to the tobacco consumption menace by spreading nationwide awareness around the alarming issue.

Be ready to watch out for this remarkable video on World No Tobacco Day, 31st May by Voot Studio and Indian Cancer Society featuring Sunil Grover only on Voot