Lava today announced the launch of an Android smartphone called Lava A82. Lava A82 will be available at retail stores and multi-brand outlets across the country. In online space, Lava 82 is exclusively available on TataCliq.com, Tata Group’s new e-commerce venture, the company announced in a press release.

Lava A82 has a 5 inch display that has FWVGA resolution. It has a 2000 mAh Li-ion battery, 5 megapixel rear camera and 2 megapixel front camera. An LED flash light is also there in the front. The phone has 1 GB RAM, 8 GB of inbuilt memory and an expandable storage slot that can hold a micro SD card of up to 32 GB capacity.

This Dual SIM smartphone runs on Android 5.1-Lolli pop operating software. The smartphone also sports ‘smart-screen gestures’ feature through which users will be able to use shortcuts to access frequently used apps like browser, camera, emails and many more. Lava A82 has GPS.

Lava A82 comes with 1 year manufacturer warranty for the phone along with 6 months warranty for the in-box accessories which include battery, headset, screen guard, charger and a USB Cable. The smartphone will be available in Blue, White and Gold variants. 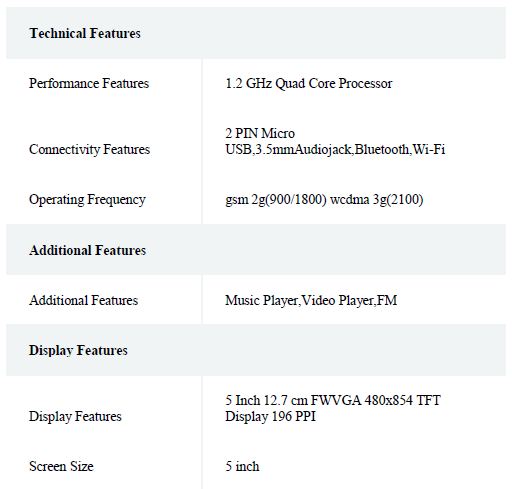