For many people in urban cities, using Ola or Uber has become one of the most preferred ways to travel within the cities. The mobile apps are easy to use and take the stress out of traveling as one does not have to worry about driving or dealing with traffic, parking or waiting in line for overly loaded public transport.

With popularity of Uber and Ola apps soaring , Google has now decided to integrate them in their popular Google Maps mobile app.

Next time you search for directions using the latest version of Google Maps on your mobile, it will show you a dedicated tab (see screenshot below) with information for cab services— in addition to the existing driving, public transport, or walking options that are already present.

So, next time you’re leaving work to meet a friend for dinner, or heading to a client meeting in a new city, you’ll be able to compare all your commuting options right from within the Google Maps app.

The Google Maps app not only shows the cabs that are in close vicinity to you, but you will also be able to see fare estimates and Estimated Time of their arrival. However, for this to work, the user needs to have the respective cab apps installed on the phone.

For Uber users, Google Maps will give choice of uberGO and uberX services, while Ola customers can choose from Ola Mini, Ola Micro and Ola Sedan options.

Here is a screenshot of how Google Maps will show you all the information: 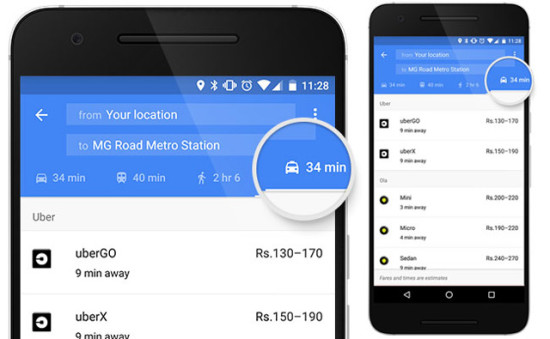 Users are going to find this feature tremendously useful, as they will now not have to open multiple apps and compare. Google Maps will show you everything on one single screen, making it much easier for the users.

Once user has selected a particular service, they will directly be taken to Uber or Ola app, depending on what they have chosen, and with single tap they can request the ride.

This feature is being rolled out on Android and it will soon be available on iOS version as well.

The launch of the digital university is a great step: Sahil Miglani, Geekster