Team Estrade: Your journey – from your first job to Country Manager of 9Apps?

Mr Ebrahim Popat: Well my journey has been the classic tale of ‘The dots will never connect looking forward, but always when looking back’. I come from a small town in India and did my engineering since most of my friends and kids of our generation did that. Even then I was a gadget buff and the way technology impacted our lives amazed me and kept me day dreaming. Though games and apps were considered uncool back then, I spent countless nights experimenting with new technology to fill my curiosity

Post that, I did a business degree to understand how can my ideas about technology can be monetised and applied to the real world. But again those were early days for the apps and games industry in India. When I graduated most of my fellow classmates went to work at telecom firms and consultancies, whereas I joined a company that owned an app store in a nascent market. Even though I enjoyed my job, I wondered if I had made the right choice. I stuck to my guts and few years later 9Apps came along and offered me this wonderful opportunity to work with a brand like Alibaba. When I look back I realise how much I have learnt and what I would have missed out on had I taken up a job I did not like.

Team Estrade: How has the app industry evolved in India?

Mr Ebrahim Popat: The mobile industry around the globe is growing strongly but unevenly, with Asia and Pacific leading the way. With the huge untapped mobile internet population, Asia is the future of mobile internet market, and India is a critical player with a population of over 1.2 billion.

App market in India is on the cusp of explosive growth. Indian mobile users generated almost 9 billion app downloads in 2015, 5 times more than that in 2012 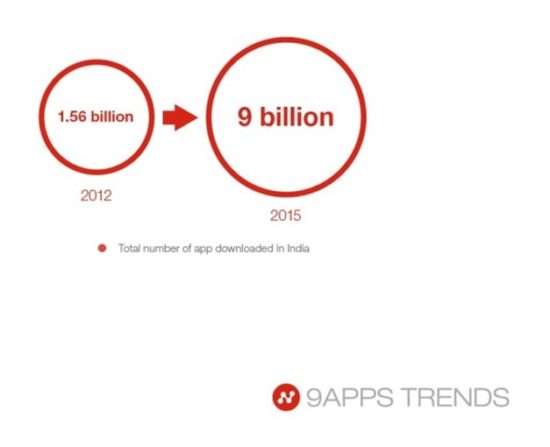 Team Estrade: How is the app industry faring in India and which are the most popular apps?

Mr Ebrahim Popat: As is highlighted by our annual report, an average Indian user installs no more than 32 apps (lower than the world average). Out of this at least 7 are gaming apps. As high-end smartphones become more popular and prevalent, this number is likely to go up further. Only 26% users have Hindi language apps since there is limited availability of apps in Hindi. English is the most used language in the app market, even in India. Most mobile users continue to download apps via 2G network and prefer offline playback versus online streaming since network connections remain weak. Going forward, poor connections could impact users’ willingness to try out new apps and thus hamper the growth of the app market. WhatsApp, Facebook, Instagram and UC Browser remain the top apps of 2015 whereas Flipkart, Snapdeal, Amazon and Paytm remain the most popular ecommerce apps

17% of all daily app downloads continue to be games – with car racing and action games being most popular. India is Asia’s fastest-growing mobile game market with expected revenue of over 1 bn by 2018

Team Estrade: Which are the most popular apps among the Indian users? 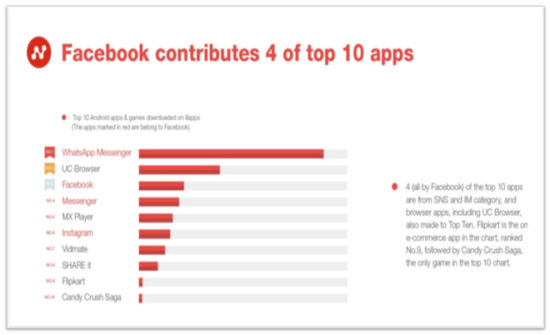 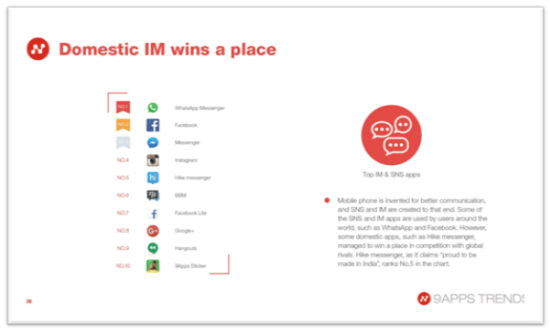 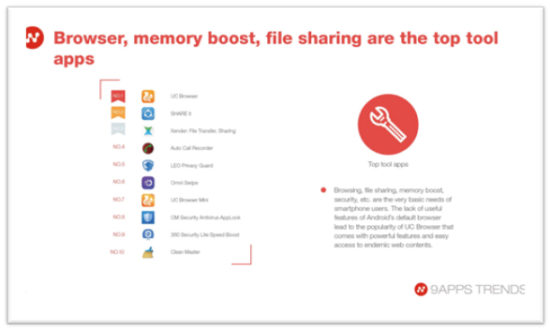 Team Estrade: What challenges are faced by Indian app developers?

Mr Ebrahim Popat: While the Indian app market is on a high-growth trajectory and presents a huge opportunity to Indian app developers it is also facing multiple difficulties – including connectivity, local online payment issues and lack of effective promotion channels. Effective addressal to these issues will attract more talent to the sector

We also announced the launch of 9Apps Trends, India’s first comprehensive local app market monitoring service that provides app trends, data analysis and an in-depth market report. The monitoring tool will address the growing need for a comprehensive app industry analysis and help local app developers and distributors. 9Apps Trends is a public web facility with free access to all

With the right platform for distribution and monetisation, developers in India will come up with content and apps relevant for the Indian market – compact, localised and in regional languages

Team Estrade: Are there any roadblocks to increased app adoption in India?

Mr Ebrahim Popat: Being a developing nation, India poses many challenges for global companies eying a share of the pie

Many Indian users are new in the mobile world without knowing how to discover content, services and apps. India’s user profile is concentrated with 80% in the age bracket of 25 years and younger. Most internet users in India continue to be male. Also, users in non-metros face issues of weak connectivity and slow browsing speeds. An average Indian user wants to save cost on data browsing and downloading

The app development industry has undergone rapid expansion and is flush with talent in India. What is missing is the right platform for app developers to showcase their talent, get exposure for their apps and connect with fellow developers. 9Apps, as one of the most important products of UCWeb, is part UC Open Platform – an ecosystem to help Indian mobile internet players acquire users and monetise traffic. As far as I know, there is no other local mobile platform in Indian market that can compare with us, in terms of user base and app distribution

Team Estrade: Where do you see 9Apps in the next 2 years?

Mr Ebrahim Popat: 9Apps is one of the most popular Android apps store with 140 million monthly active users worldwide. The two stores altogether have also reached 8.5 million Daily Active Users (DAUs) with over 18 million daily aggregate downloads of apps and games. As the world’s leading third-party app stores for Android apps and games, we position us as a local app store in those countries.  Apart from all the free apps available on Google Play, we provide local apps with more visibility, and offer better experience to local users with localized elements

9Apps is optimized for local network conditions to guarantee a downloading experience to users even if they are in bad connection. Mobile payment is a big issue for India users. 9Apps has tied up with telecom players so that all in-app purchases are added to your monthly mobile bill, even if users do not have a credit card

Keeping in mind the challenges faced by Indian app industry, we have announced the launch of 9Apps Trends, India’s first comprehensive local app market monitoring service that provides app trends, data analysis and an in-depth market report. The monitoring tool will address the growing need for a comprehensive app industry analysis and help local app developers and distributors. 9Apps Trends is a public web facility with free access to all. We want to share the big data and our insights with the industry about mobile app user behaviors. The report will help Indian mobile users keep up with the trend, and enable app developers to perceive the ever-changing need in the market and twist their business tactics accordingly

9Apps also launched its new logo recently. The new logo follows the original one and uses number 9 as the graphics core, meanwhile adding the image of the concept of the eagle. Two abstract eagles flying rotated around a circle, showing the sense of speed. Wherein the composition of the logo is the shape of the typhoon, but also overlapping shapes of number 9, thereby highlighting the brand and the 9Apps store with lighter, faster and younger feel. The new logo uses a modern font which looks more friendly and approachable, and is clear on various mobile devices with different resolution.